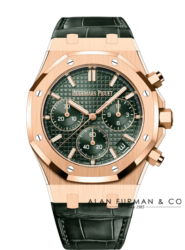 Our Commitment to You
Alan Furman & Company features authentic Audemars Piguet 41mm Model 26240OR.OO.D404CR.02. Every Audemars Piguet watch, along with Audemars Piguet 41mm Model 26240OR.OO.D404CR.02, we sell is guaranteed to be authentic. We have been selling Audemars Piguet Watches since 1985. We discount genuine Audemars Piguet watches including Royal Oak, Millenary, Tradition, and Classique models.  We guarantee each watch is thoroughly inspected before being shipped to you. Our fine watch division offers great discounts on all Audemars Piguet watch models. We honor the manufacturer’s warranty on every watch that we sell.  These watches will be accompanied by a warranty from Alan Furman & Co. which displays our written guarantee.  Merchandise and watches may be returned to us for warranty repair or replacement. Items purchased from us that are not special orders may be returned unused for a full refund, less shipping costs. All returns must be made within 10 days of receipt.

Jules Louis Audemars and Edward Auguste Piguet found the Audemars Piguet collection when they joined forces in 1875. They both had skilled watch making abilities and showed excellent precision that still distinguishes the company today. In 1892 they began shocking the world with their introduction of the first minute repeater watch. The followed up with the smallest five-minute repeater caliber ever made, with a diameter of just 15.80 mm. in 1915. Among other accomplishments were the creation of the world’s thinnest watch in 1946, the World’s first thinnest self-winding caliber with central rotor in 1967, and the first ultra-thin (5.3 mm thick including the case) self-winding tourbillion wristwatch in 1986.Their most recent additions to the Audemars Piguet collection are the first watch featuring a carbon case and movement in 2008, and the high-frequency chronometer with Audemars Piguet escapement and double balance-spring in 2009. Today, Audemars Piguet is still the oldest timepiece manufacturer never to have left the hands of its founding families. This gives the business a self-determining streak that allows it to go its own way and follow its own distinctive vision. Audemars Piguet has a number of ambassadors that represent their same value of creativity and independence. Some of them include; Belen Mozo, Bud Cauley, Lebron James, Lee Westwood, Leo Messi, and Nick Faldo. Audemars Piguet is also partnered with Art Basel, Bolshoi, and Zona Maco.

Call us for pricing and availability on Audemars Piguet 41mm Model 26240OR.OO.D404CR.02 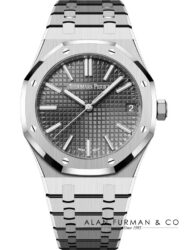 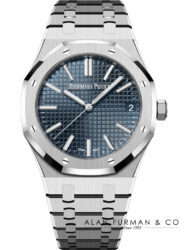