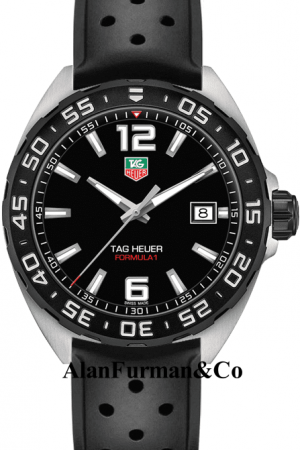 Our Commitment to You
Alan Furman & Company features authentic Tag Heuer WAZ1110.FT8023 41mm Quartz. Every Tag Heuer watch, along with Tag Heuer WAZ1110.FT8023 41mm Quartz, we sell is guaranteed to be authentic. We have been selling Tag Heuer Watches since 1985. We discount genuine Tag Heuer watches including Aquaracers, Carreras, Grand Carreras, Links, Monacos, and Formula 1 models.  We guarantee each watch is thoroughly inspected before being shipped to you. Our fine watch division offers great discounts on all Tag Heuer watch models. Most Tag Heuer are either stocked in our inventory or is readily available in a matter of days. We honor the manufacturer’s warranty on every watch that we sell.  These watches will be accompanied by a warranty from Alan Furman & Co. which displays our written guarantee.  Merchandise and watches may be returned to us for warranty repair or replacement. Items purchased from us that are not special orders may be returned unused for a full refund, less shipping costs. All returns must be made within 10 days of receipt.

The Tag Heuer Brand
Edouard Heuer founded his company, Tag Heuer, and started making timepieces in 1860. It was not long before Tag Heuer watches became associated with superior timekeeping and set the standard for precision timepieces. The first Tag Heuer patented was for a keyless, crown-operated winding system for pocket watches. In 1882, Tag Heuer patented the first chronograph models. Tag Heuer invented the ‘oscillating pinion’ for mechanical stopwatches in 1887 and patented it. It is still used to this day by leading manufacturers. After Edouard’s unfortunate death in 1892, his son Jules-Edouard took over his position in the Tag Heuer company. Jules-Edouard got right to work and patented the first water resistant pocket watch cases in 1895. Tag Heuer launched their debut of the new Pulsometer dial in 1908, which is still used today by doctors. Tag Heuer came up with many inventions including: the Auto-Graph model (1948), a wrist chronograph with a tachometer scale and a manual reference hand, the Solunar model (1949), the first watch with a tide indicator, and the Twin-time model (1955), a self-winding wristwatch with a second time zone indicator.

Tag Heuer has provided official timekeeping services for a variety of sporting events, including the 1920 Olympic Games. Other sporting events sponsored by Tag Heuer include the FIA Formula 1 World Championship auto racing (since 1969) and the FIS Ski World Cup (since 1992). Tag Heuer has also provided timekeeping for many major ski resorts worldwide, including in the Vail, Colorado, French, Austrian and the Swiss Alps. Tag Heuer watches has prominently been associated with auto racing. Tag Heuer developed the first automobile dashboard clock in 1911. Tag Heuer has sponsored Formula One racing drivers such as Niki Lauda, Emerson Fittipaldi, Jacky Ickx, Michael Schumacher, and Ayrton Senna. Since 1986, the McLaren Formula 1 racing team has been endorsed by Tag Heuer watches. Recently, Tiger Woods has joined the TAG Heuer endorsement team.