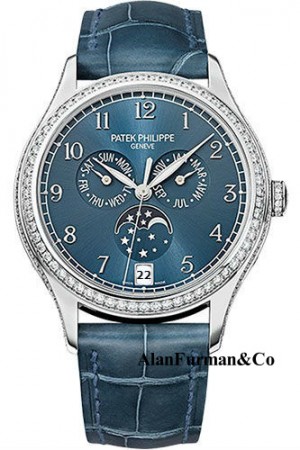 Our Commitment to You
Alan Furman & Company features authentic Patek Philippe 38mm Model 4947G-001. Every Patek Philippe watch, along with Patek Philippe 38mm Model 4947G-001 we sell is guaranteed to be authentic. We have been selling Patek Philippe Watches since 1985. We discount genuine Patek Philippe watches including the Complicated models, Twenty~4, Calatrava, and Golden Ellipse Collection in Men’s, Ladies, and Midsize models.  We guarantee each watch is thoroughly inspected before being shipped to you. Our fine watch division offers great discounts on all Patek Philippe watch models. Most Patek Philippe are either stocked in our inventory or is readily available in a matter of days. We honor the manufacturer’s warranty on every watch that we sell.  These watches will be accompanied by a warranty from Alan Furman & Co. which displays our written guarantee.  Merchandise and watches may be returned to us for warranty repair or replacement. Items purchased from us that are not special orders may be returned unused for a full refund, less shipping costs. All returns must be made within 10 days of receipt.

The Patek Philippe Brand
Patek Philippe & Company is an exceptional luxury Swiss watch manufacturer that was founded in 1852 by Antoni Patek and Adrien Philippe. It was originated in Geneva, Switzerland. The Patek Philippe brand include some of the most complicated mechanical watches. Antoni Patek was born Piaski, Poland in 1812. At 16 years old, Patek joined the Polish 1st Mounted Rifles Regiment. Patek was promoted to second lieutenant of the 1 August brigade in 1832 and later that year he was given the Virtuti Militari Golden Cross. When the uprising fell apart, many officers of the Polish Army, including Patek, had to relocate. Patek moved around, but finally settled in Switzerland, where he learned his passion for watch making. He started making pocket watches in 1939 with Franciszek Czapek, his Polish partner. Their company, Patek, Czapek and Co, only lasted until 1844 when their partnership deceased. During the next year Patek met Frenchman, Adrien Philippe, and quickly became business partners. Adrien Philippe was born in La Bazoche-Gouet, France, a small town about 50 miles southwest of Paris. He travelled to Switzerland and started his watch making career. He designed a mechanism for watches which allowed them to be wound and set by the crown rather than a key. This patented invention won him the Gold Medal at the French Industrial Exposition of 1844. Antoni Patek was so impressed that within the next year he made Adrien Philippe head watchmaker at Patek & Co. He proved to be valuable at his craft. In 1851 Patek made him a full partner and Patek Philippe & Co was created.  Patek Philippe established the perpetual calendar, split-seconds hang, chronograph, and the minute repeater in watches. Patek Philippe & Company is currently run by their President, Thierry Stern and continues to make some of the most prestigious watches throughout the world.